Monitoring is considered one of the most important process in today’s world of Technology. Most Datacenters have their private monitoring systems with automation tools that would trigger failover, or Disaster Recovery in case of downtime being noticed and this is extremely costly operation.

Other services can be monitored like Web Servers, FTP, Mail Servers or anything else if it’s publicly accessible.

Uptime Robot Monitoring is a free-commercial service that has rich monitoring features where you can monitor your services/servers on 1 minute interval and get alerted by Email, SMS, Phone Apps e.g. (Telegram, Google Chat, or Skype).

In the free version Monitoring you can add services based on ports and protocols or Servers. This might look limited to some but since it’s free of charge it can be very useful for small or startup companies with couple of servers.

– Logs are not kept 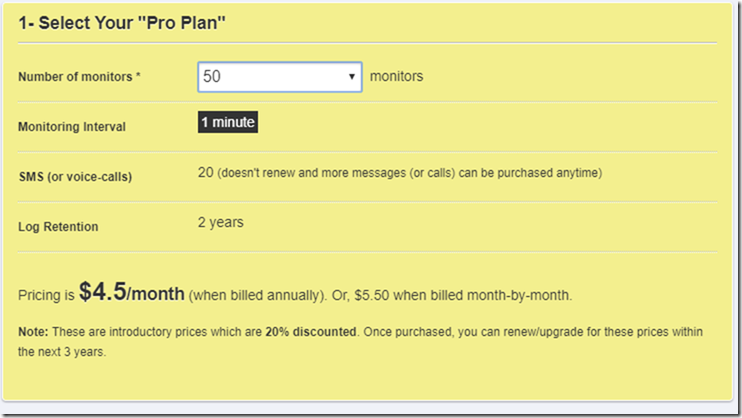 In the commercial version you pay a small fee of 4.5$ a month, an you’d get the following:

Adding a Server to Monitor:

After you create an account on UpTimeRobot.com you can easy add a site or a service to monitor right away and the monitoring will initiate after 5 minutes then it’ll report if the service,server you added is up or down. 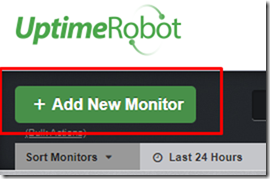 Next add the website, In my case i’ll add my own website and see how it works and then choose Google Chat (Since I already have the integration on).

If you click on the Monitor, you’ll get the stat figure of how long has your website been on/off

After waiting roughly 35 mins, I can see now that my website is up and running without any problem. The monitoring probe counts by milliseconds so you’ll be able to see if there’s any interruption in the connection to your website/server. 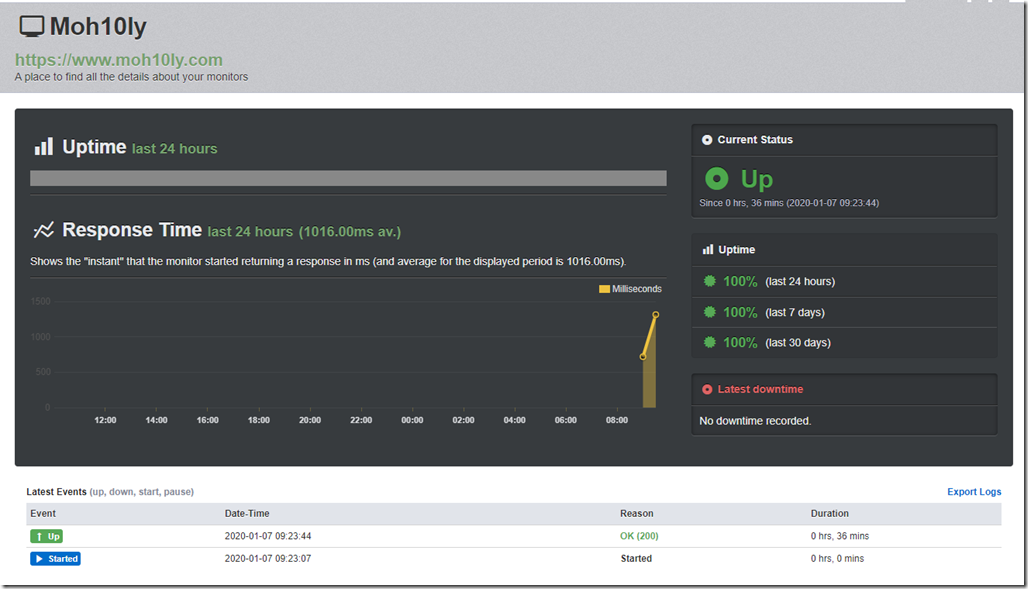 I will login to my G account with admin user 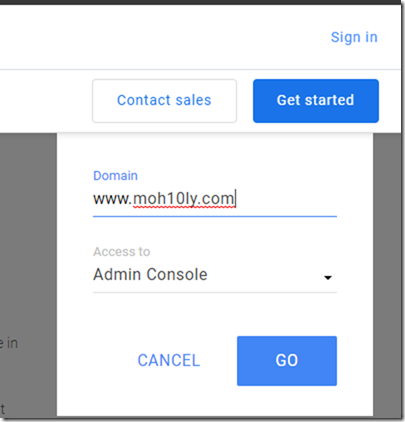 Next go to Chat admin console 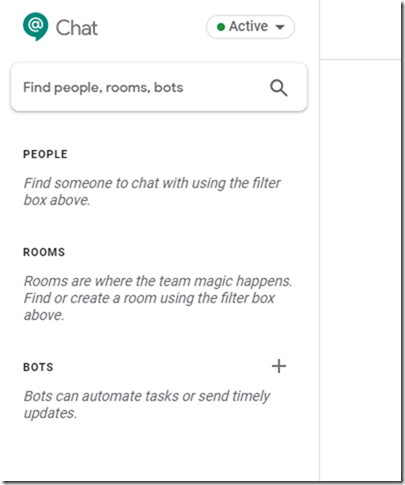 Create a room, Call it UpTimeRobot 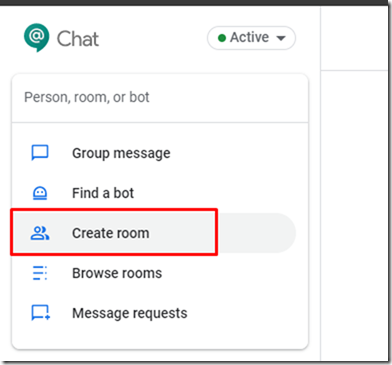 Once Created, Click on the … dots next to Now 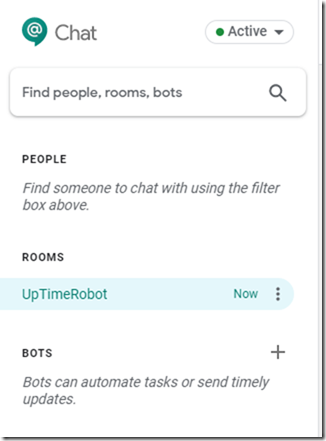 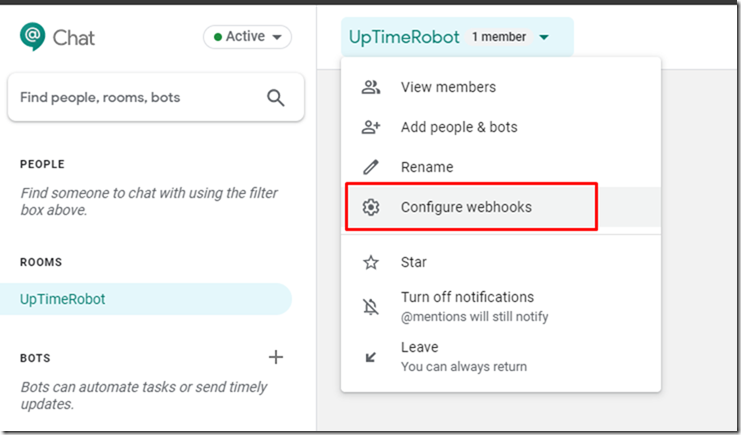 Call this UpTimeRobotContact and save 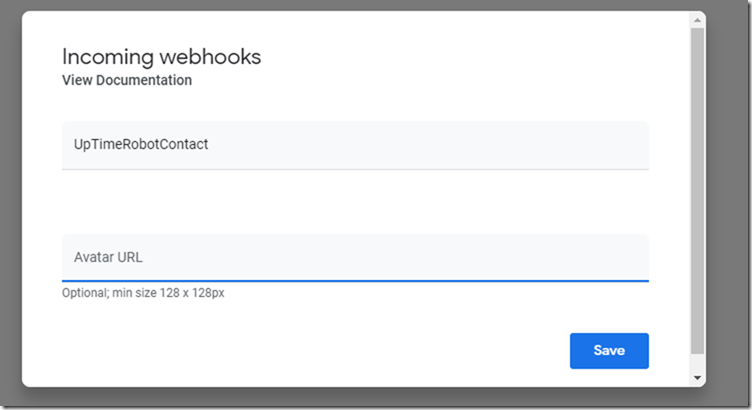 This should create a URL for you, Something that looks like this! This

Adding Members (To get notifications)

On the right side Add People and Bots 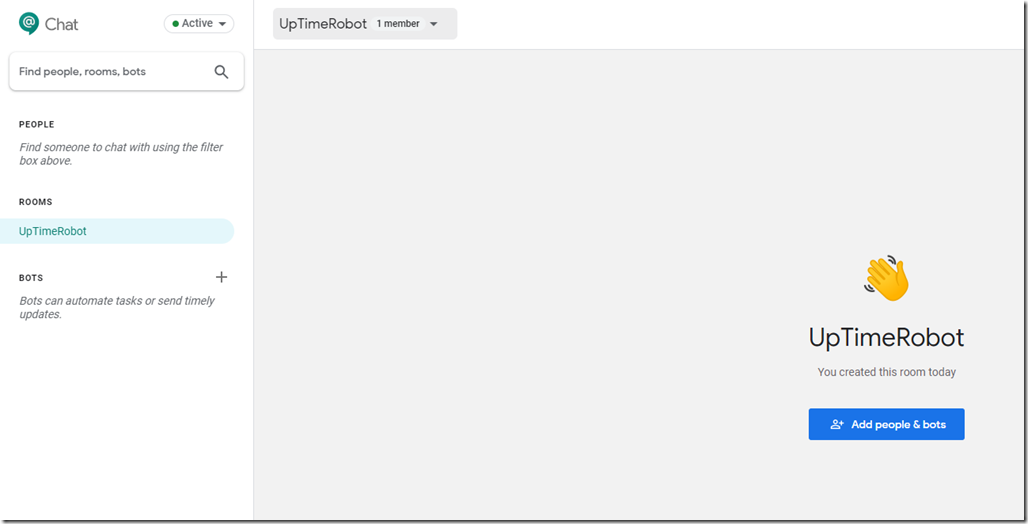 Add a user to receive notifications once any server or service is down. 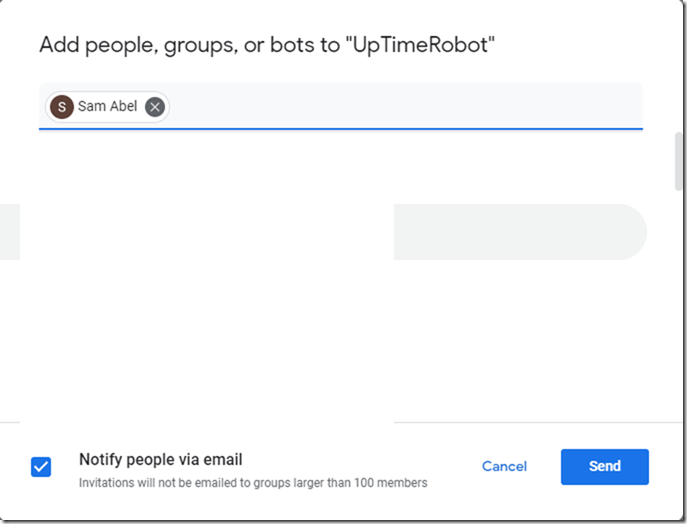 Once you add a user, you’ll notice that the admin user’s notification below saying he/she added a user to the Room. 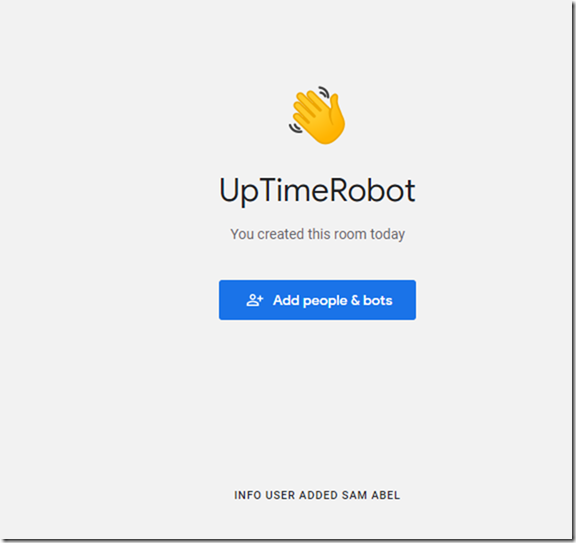 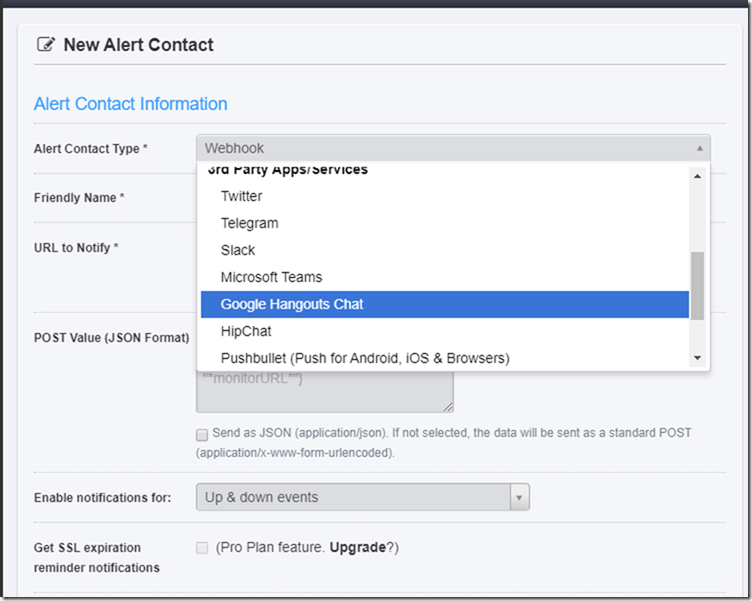 When we choose the Google Hangouts Chat, We will have to give the following: 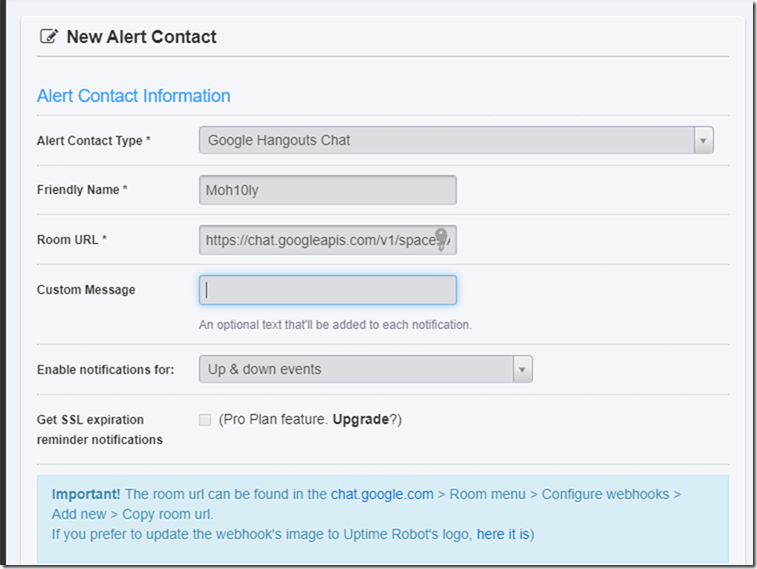 After adding this, You need to download one or two apps to get alerts to your Cell Phone:

As soon as your system goes down, Google Chat will sends you a push notification to your phone, if you’re using UpTime Robot and you’re logged in to the account then you’ll get another identical notification at the same time indicating your system’s status if it goes down or back up.

Like this you can add up to 50 monitors including all kinds of services, ports, protocols.

The notification also comes with an interesting tone so you could easily tell if the sound is for “System Down” or “System is up” kind of state.

This has personally helped me keep my system up 24/7 and interfere whenever there’s any downtime noticed.

I hope this article helps and in case you have any question please leave a comment or get in touch with me info@moh10ly.com

In order to Download an Azure Virtual machine and make it possible to upload it and get it to work on Google cloud, I am going to export a working virtual machine with Ubuntu 15.4 server version on it with WordPress installed and functioning.

First I’ll have to have Azure PowerShell installed on my Windows PC before starting, If you don’t have it you can download it from the following link below.

Launch the azure PowerShell as an administrator use the following cmdlet which will launch an Internet page that will direct you to login to your azure subscription to download a setting file.

Then when the file is downloaded, Navigate to the download folder and import the subscription using the following cmdlet

Now I will get my Virtual machine’s storage blob link from the Azure portal, I’ll press on the arrow next to the VM’s name

Then scroll down to Disks

Next I’ll start downloading with the following command

Once the file downloading is finished, I’ll have to install VirtualBox from the following Link (it works on Windows 10 as well) and it’s needed as it has conversion tool. 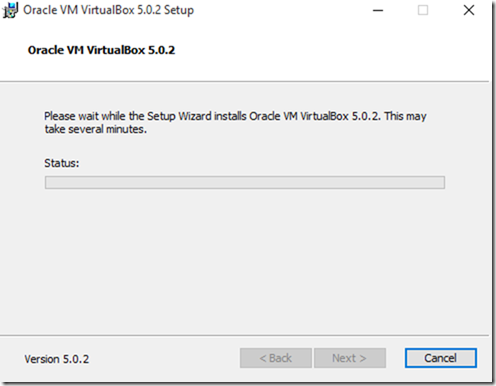 Next I’ll download the following tool VBOXHDTOOLS from the following link and install it.. (It uses UI instead of command line for the conversion) 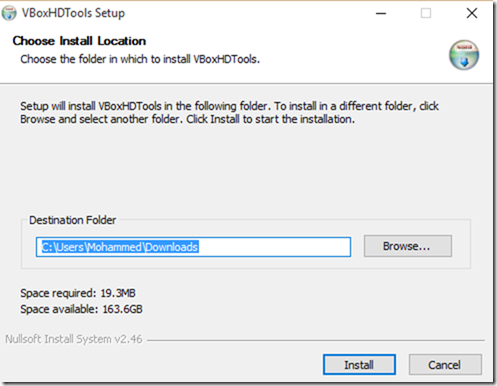 The tool comes normally in Spanish language, so I’ll transfer it to English 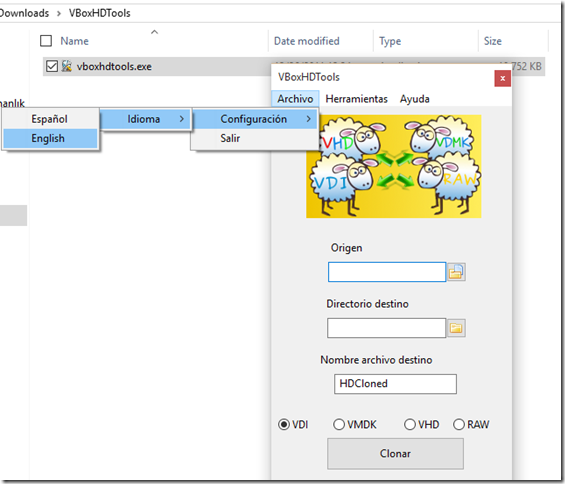 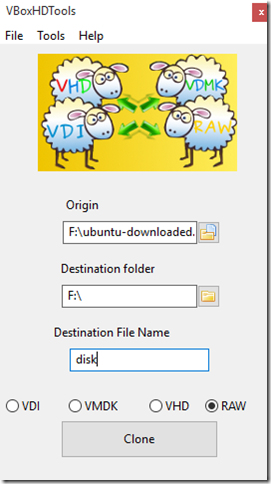 Once you click Clone, the conversion will start but will take some time depending on the size of the VM and the speed of your Disk (SATA or SSD)

When the conversion has finished and the RAW file is ready, we’ll have to do the following steps which is also documented In the below Google Link on how to import a virtualbox image

STEP:1 I’ll have to Download, install, and authenticate the Google Cloud SDK:

Since I am running a Windows machine then I won’t be able to use some commands in the document by google like Curl and Tar ..etc so I’ll have to download the Google cloud SDK from the following link and install it first… 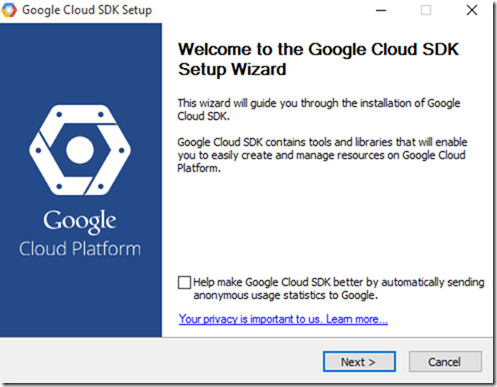 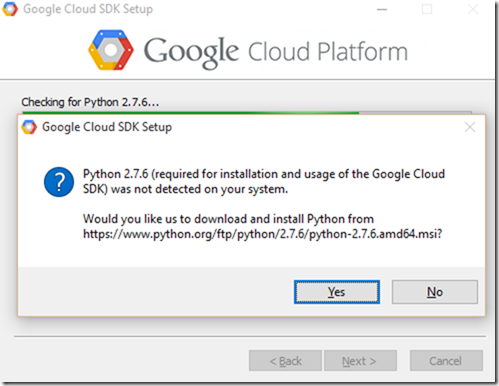 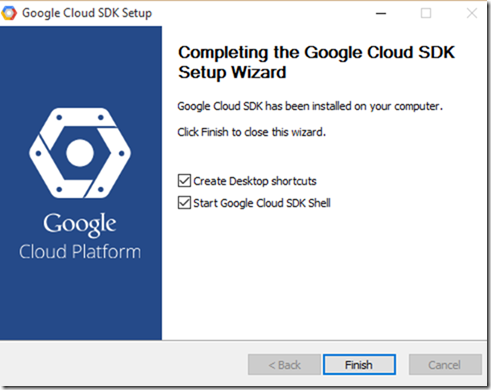 The moment you enter this command (gcloud auth login) in Google cloud SDK shell the browser will launch google chrome and ask for authentication from your google account.

So i will go ahead and type the following to authenticate, as soon as you press enter the default browser will launch and redirect your page to google authentication to setup your gcloud trial and get your authentication approval.

I’ll let it authenticate and continue 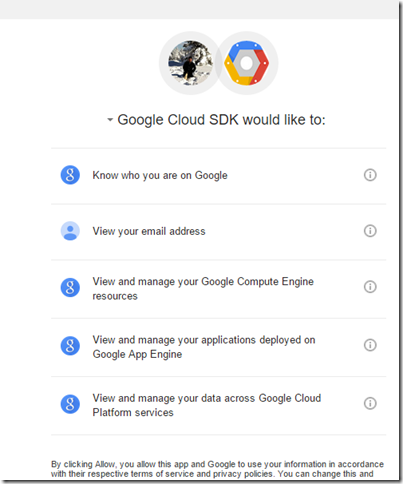 As you can see below we have been authenticated now and next we’ll be choosing the project (Like subscription in Azure).

Once authenticated, I’ll choose the project in my google cloud account which I want to export the VM to.

If you don’t know your Project name or you don’t have a project, you can do so from the google cloud console 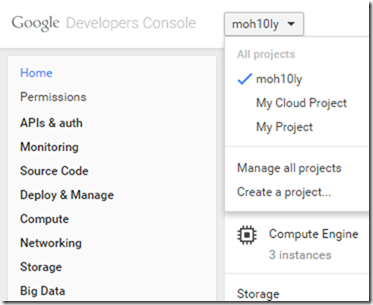 Now I’ll have to compress the RAW Virtual machine to TAR extension which is a must since Google doesn’t accept any other format and in order for it to be uploaded to Google Cloud Bucket that I have created.

To download Cygwin and install it on Windows use this link 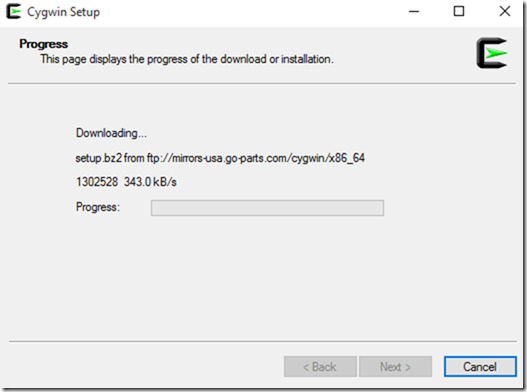 After downloading and installing the tool, I will have to copy the disk.raw to a location where I can easily access it in Cygwin to compress it

When you install Cygwin, it gives you the option to choose the installation path which is by default C:\ root directory, however I have chosen a different path for this program which is F:\ root in my case 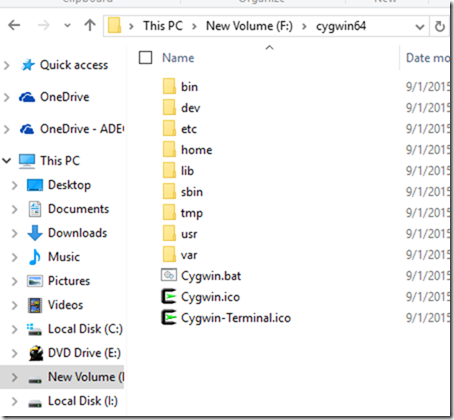 So in order to access the Disk.raw file I’ll copy the file to F:\cygwin64\home

Once the file is copied there, you can launch Cygwin as an administrator and you can view the directory by typing (LS) command and enter

$ LS  (the LS should be small letters)

If the file is not there, then you must look in the newly created folder which is typically your Window’s User profile name and copy the file again there too.

Once the file is copied and you have access to it via the Terminal then you can start and compress the file to TAR as in the below screenshots.

When the compressing has finished, you will be able to see that the file is there and has its size decreased to 605 MB

Now since the file is ready to be uploaded, I will launch the Google SDK terminal and navigate to the path where the file is located (Or simply copy it to an easier location e.g. C:\) and upload the file to google cloud bucket using the following command line

What the command does is it actually copies the file with the command CP to the cloud storage which is gs://moh10lybucket (Make sure your google sdk terminal is already authenticated to your google cloud account). 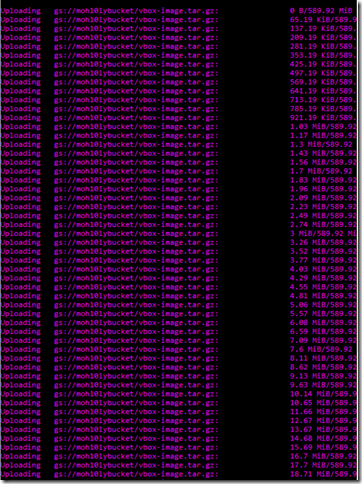 Importing the fıle after uploading

I’ll use the following command

Check in google images in google cloud if the image is imported and it is .. First image imported as in the below snapshot 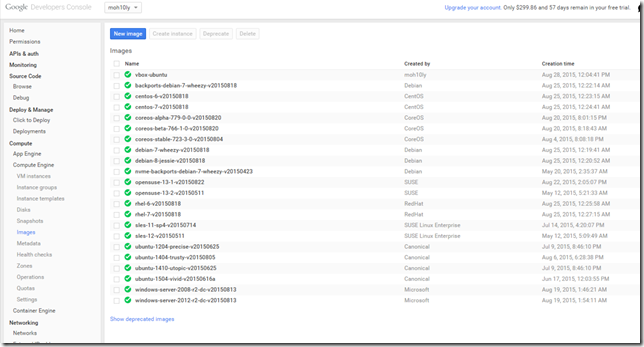 Now I will deploy it as a VM and see if it works!

It did get imported and it works, You can access the ip below to see if my website is active or not!

Hope this was helpful.