There may be times when it is useful to use an existing Group Policy Object (GPO) as a template for a GPO on another server, or perhaps you just need to perform a GPO backup and restore. Here is how to export and import GPOs from the command line.

Firstly, from the command line start powershell and import the Group Policy Cmdlet:

Check that the backup directory you wish to use exists. If not, create it.

Example: to backup a GPO called “Example GPO” to the directory “C:GPOBackup”

Example: to import a GPO called “Example GPO” from the directory “C:GPOBackup”

Example: to import a GPO called “Example GPO”, renaming it to “New GPO”, from the directory “C:GPOBackup”

Import-GPO
-BackupGPOName
&quot;Example GPO&quot;
-TargetName
&quot;New
Reuse DirSync in a new server after removing DirSync or in case DirSync server has crashed or no longer working.

Once you type enter a GUI will come up showing you all the deleted users list, you should delete any old non-usable account that has similar attributes to the ones that you’re about to Sync from the AD to O365.

Note:
You must be sure that when you run this command, you will no longer be able to restore any deleted item or object later on.

Now you should run the following Script on the same open powershell in order to start the copying process. 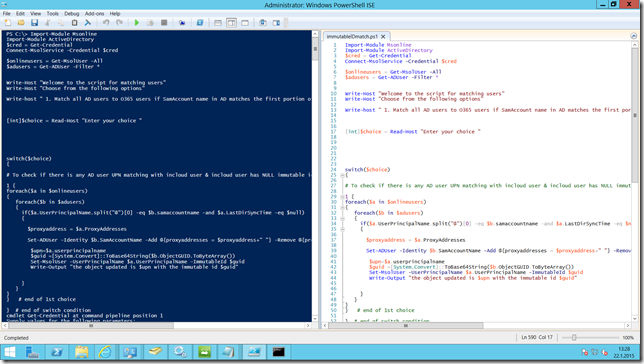 After the copy is finished you can match for yourself the list of ImmutableID along with the GUID
Ldifde -f dump.txt 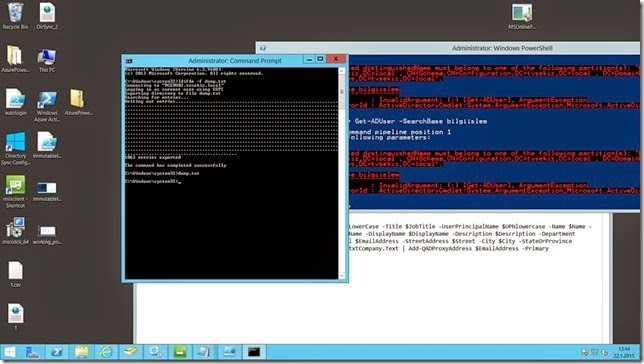 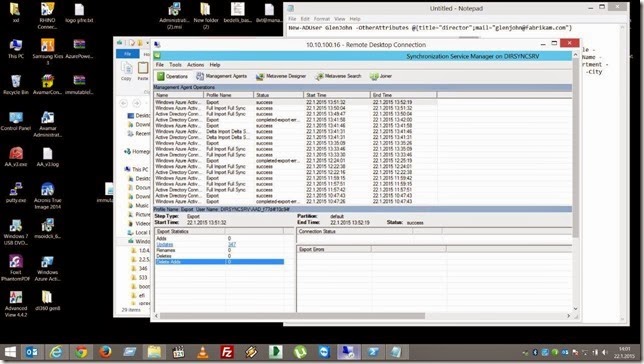 Hope you find this useful coz I did

In this part, I will be demonstrate how to Install exchange 2013 and prepare new Databases along with preparing the servers for high availability (DAG).

– Two NIC, one for MAPI and one for replication.

Installing Prerequisites on all exchange servers

Launch Powershell as administrator and copy then paste the following.

When finished continue with the following Cmdlet on each Exchange server. 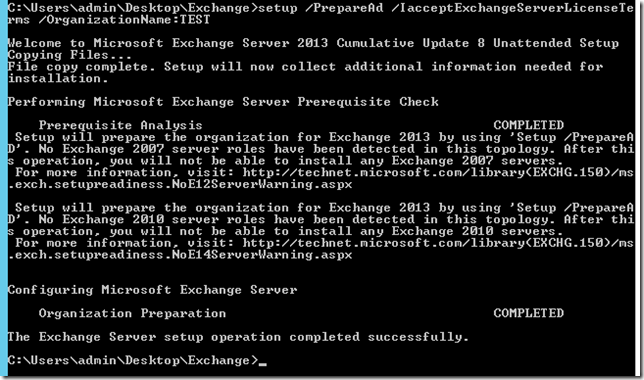 You should download and install the following software prerequisites as per Microsoft’s TechNet article regarding the installation. the software is available the link I posted earlier above or through this link Exchange_Prerequesties 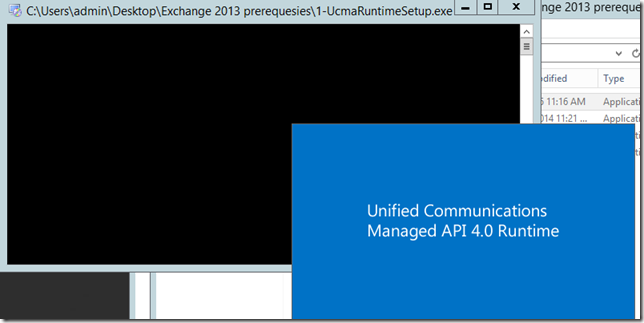 After running all the prerequisites , we can start installation of Exchange 2013 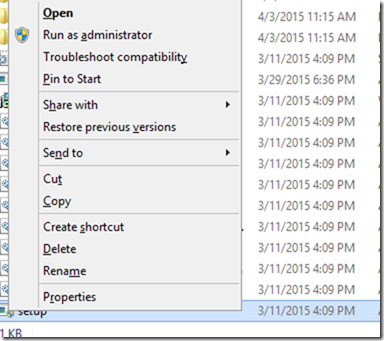 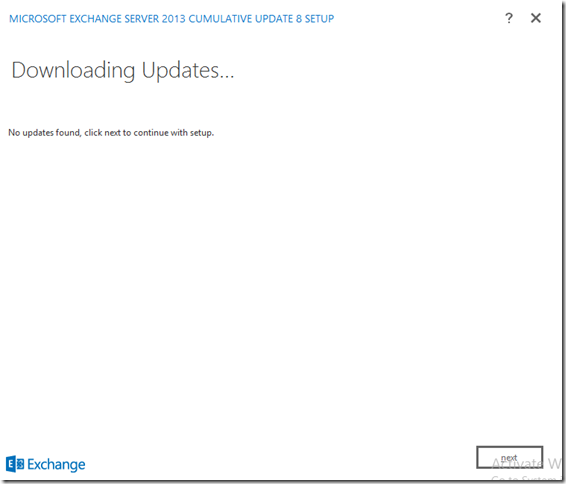 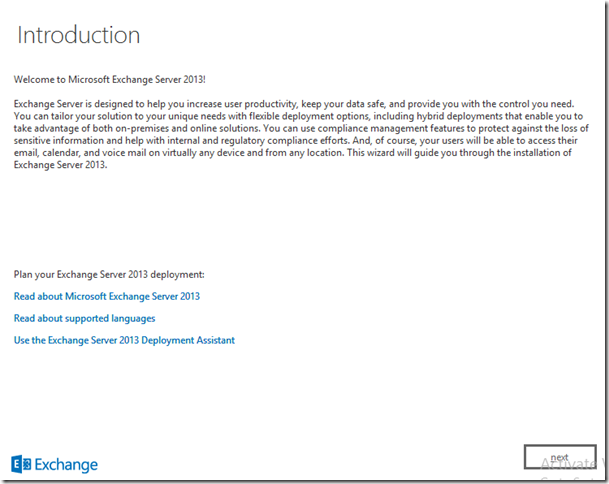 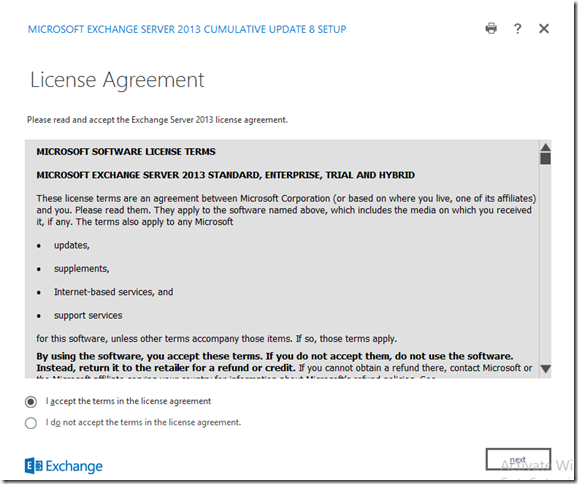 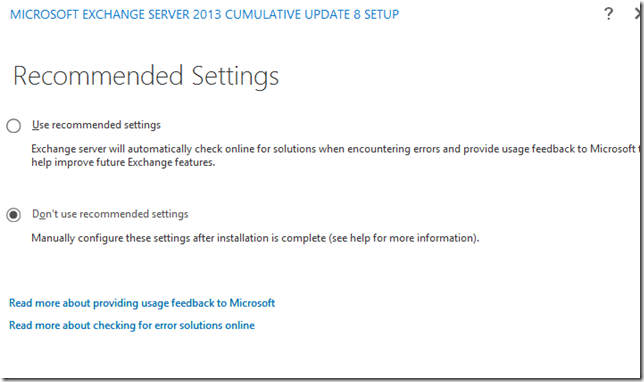 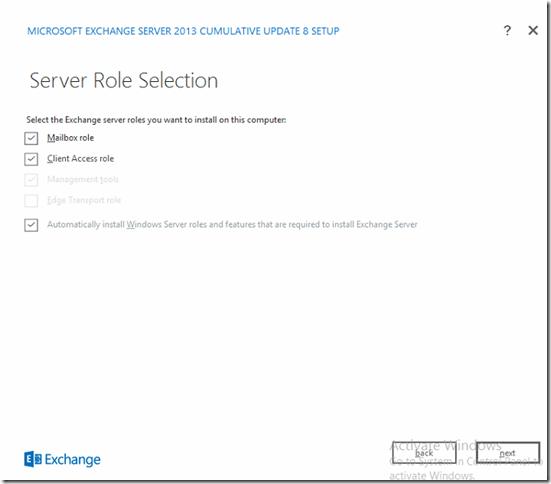 Here I am going to change Exchange’s default installation path and place it on a different partition to avoid any data loss in case of Windows server crash or booting issues. 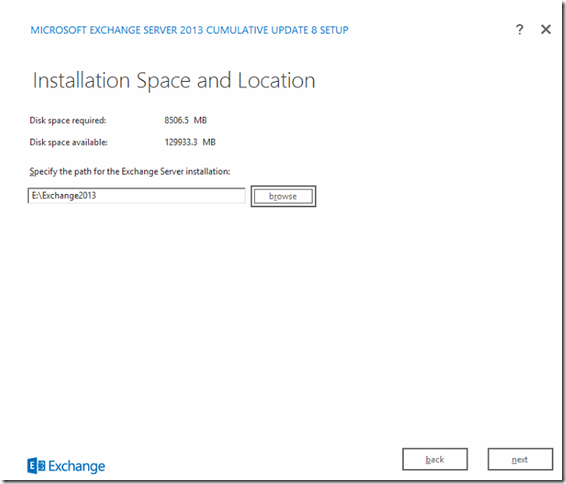 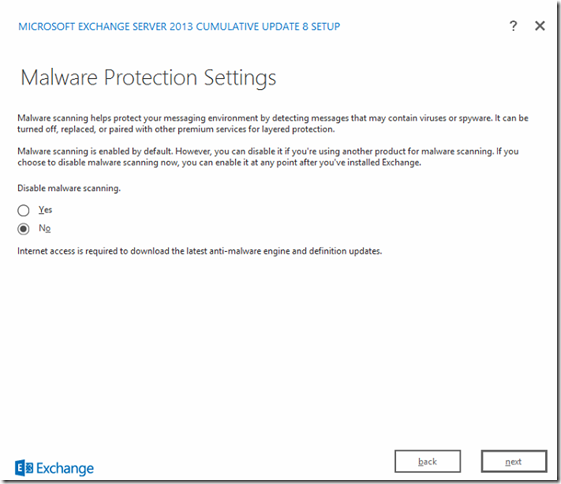 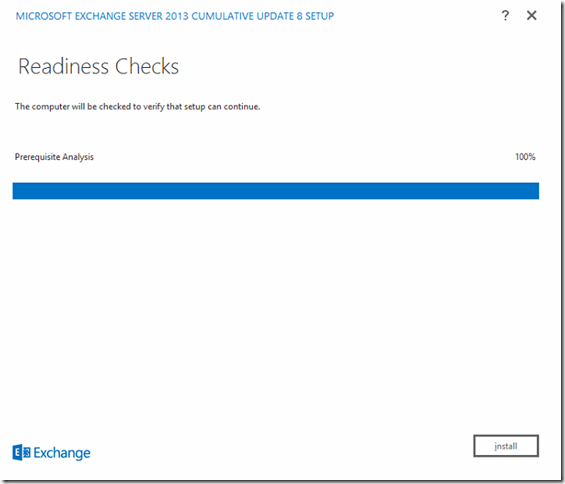 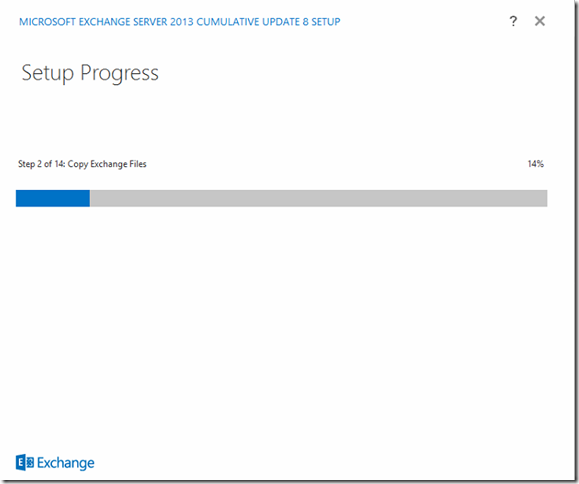 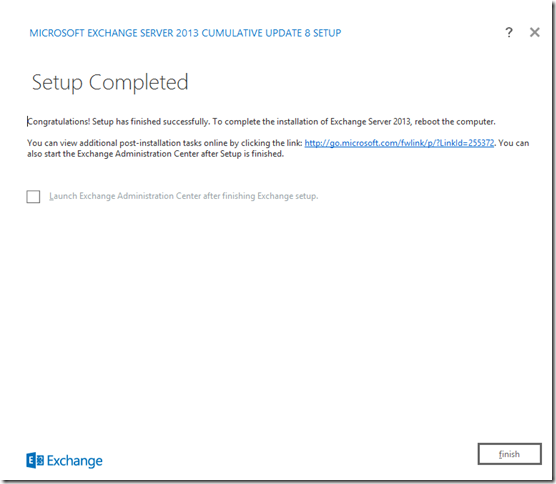 Now we install the second Exchange server, that will hold the same roles on it as the first one (Mailbox and CAS).

The steps are going to be exactly the same except that you won’t have to prepare the schema or AD since it’s already prepared.

Installation has finished for both servers

It’s better to mount the database upon creation and not restart the IS instantly after that.

First we’ll have to start off by creating our targeted databases which we want to use them. Note that for the standard version of Exchange 2013 you can only create up to 5 databases per mailbox server.

In order to demonstrate all benefits of Exchange 2013 and its features including DAG. I will create 2 databases. One database on each server.

The first database will be called DB1SRV1 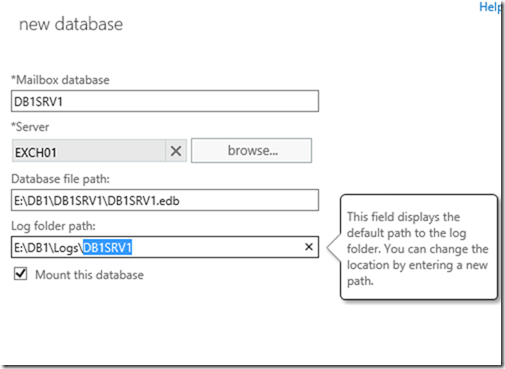 As soon as we have created the Database, we faced the following error with event ID 106 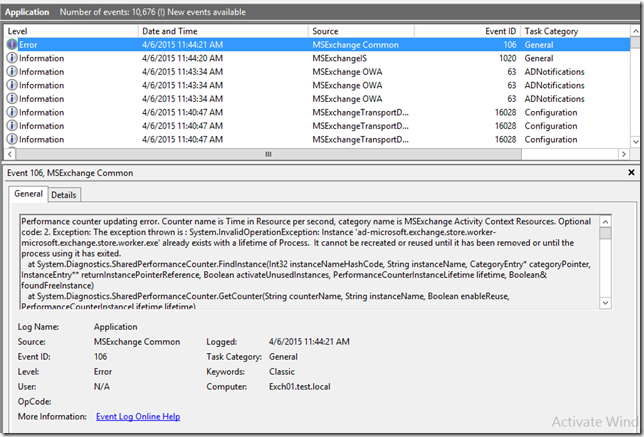 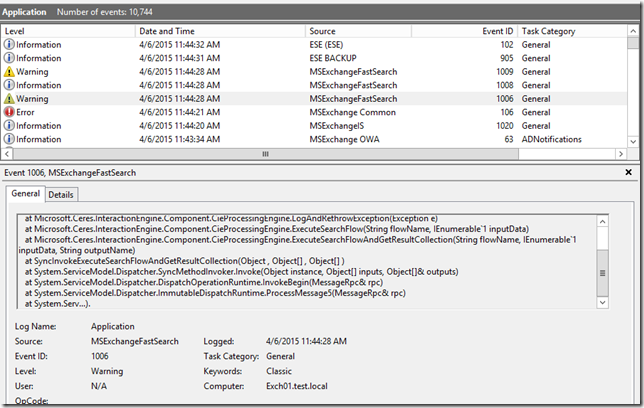 This indicates that a database should not be mounted upon creation, you should untick the mount DB option when you create one.

After waiting a bit the following logs should appear and show a healthy indexing start.

Once the DB has been created, Exchange AC will require that you restart the IS (Information store Service) in order for replication to happen without an issue.

Database is showing healthy and no issues so far.

Now we’ll create a new DB on the second server without ticking the mount DB option. 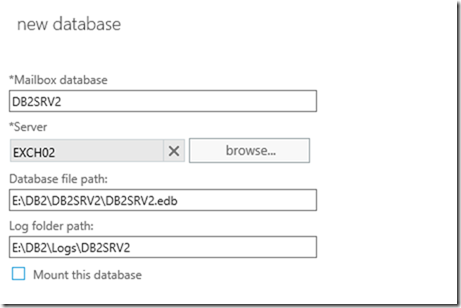 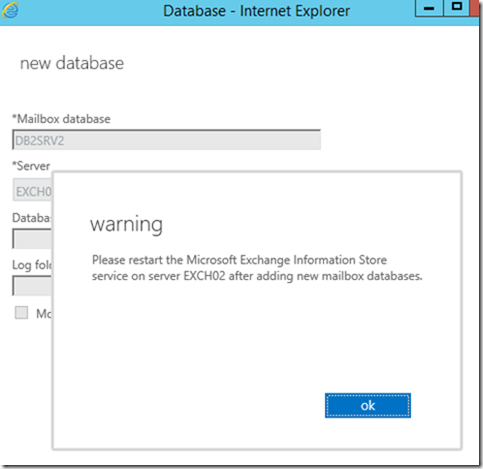 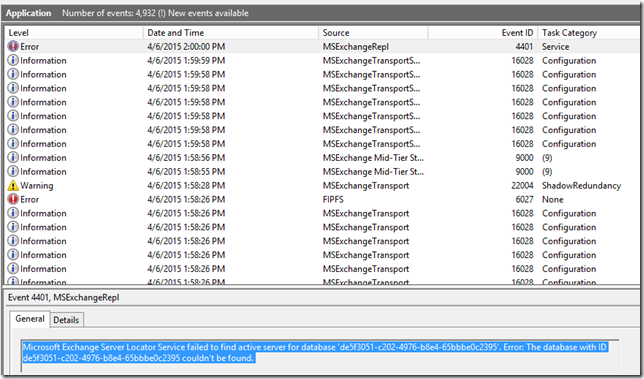 The same exact errors came after creating the Database without mounting it.

Now let’s restart the IS service and mount our database then see what happens..

Upon restarting the service, we get the following error which is related to the MS Exchange replication service . It noticed that the database that we have created has never been mounted in order to start the indexing. 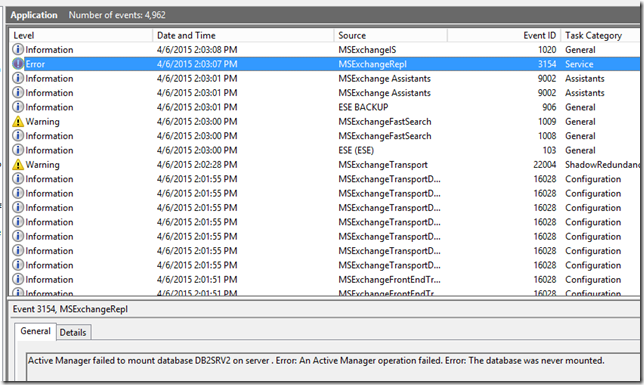 Let’s mount the database and see the changes 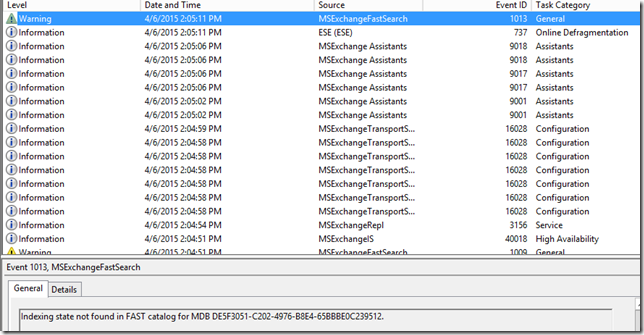 No indexing state have been found and so the FastSearch service will give you a 1013 warning report. This is a good warning because it reports that the service is working properly and that it will create the indexing folder after couple of minutes as we’ll see later.

It takes approximately 3-5 minutes for the database to start the indexing.

Now on the EAC, the DB should report healthy. Let’s see

First we’ll have to copy the default databases’ names in notepad to run the command properly.

All mailboxes have already been moved to the new DB, now let’s check if there’s anything left in the Old DB.

To remove the DB, you will have to type the following command in EMC:

The warning above is apparently due to Exchange permission on AD. It has been described in detail on how to solve this warning by  Nuno Mota in the following Link.

For the second server, You will have to repeat the same steps as on the first deleted MB Database.

Hope you like this, Stay tuned for the second part

In some scenarios when you have configured Exchange 2013 with Exchange 2010 or 2007, you may get this errors: 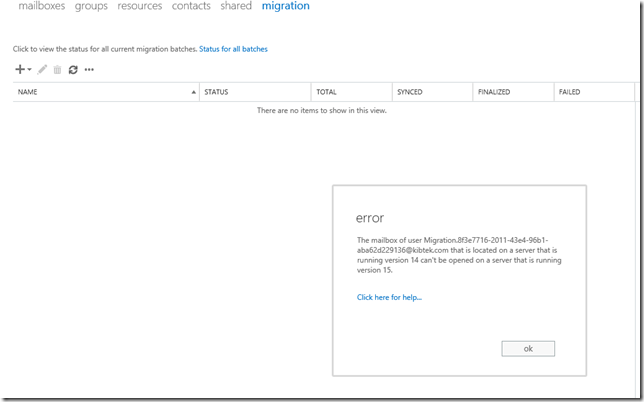 After you create a DAG and add mailbox members to it, you try to add a copy of a certain database but you receive the following error:

Error:
Seeding of content index catalog for database DB2 failed. Please verify that the Microsoft Search (Exchange ) and the Host Controller service for Exchange services are running and try the operation again. Error :Could not connect to net.tcp://localhost3863/Management/Seedingagent-XXXXX/Single. The connection attempt lasted for a time span of xx:xx:xx. Tcp error code 10061: No connection could be made because the target machine actively refused it 127.0.0.1:3863 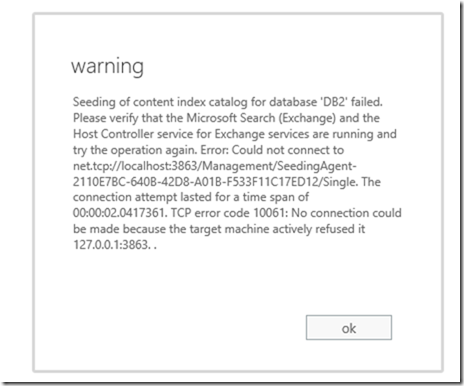 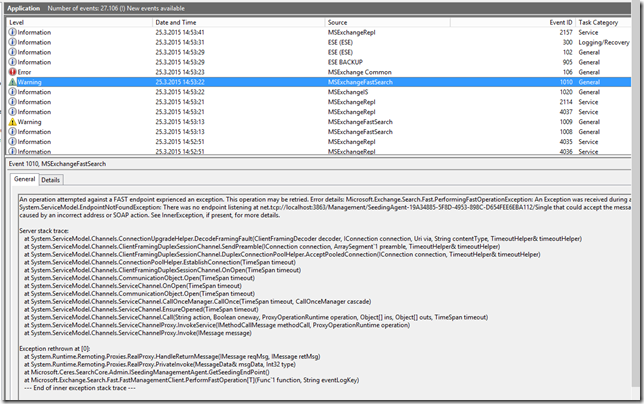 Navigate to the following path:

The first step will uninstall the services:

The second step will be reinstalling the service foundation again. the only difference in the cmdlet is the parameter -i

After doing this you should delete the copy database’s index folder, and then start the services again.

Note:
After restarting the services, it could take 10-15 minutes for the database indexing to start and for it to report healthy.

Installing host agent and configure it on VMM error

When you try to add a new host to the VMM , you get the following warning: 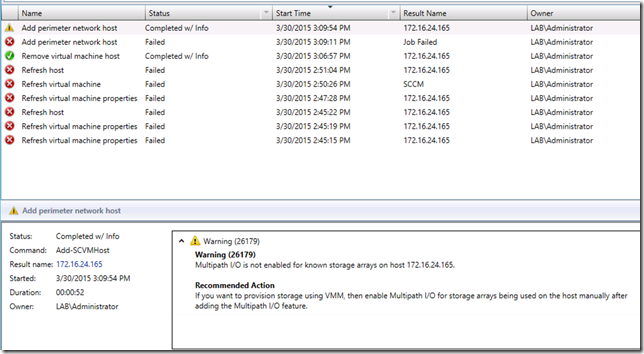 In order to resolve this problem, you will have to install two features on the host machine.

To do so, run Windows Powershell as admin

Run the following Cmdlets then

Once the command is finished it’s recommended to restart the server.

You receive an error 408 when you try to install VMMAgent on HyperV host machine that you would like to add to SCVMM for management.

lynchyperv.lab.com has an unsupported version of the Virtual Machine Manager agent installed.

Uninstall the Virtual Machine Manager agent using Add or Remove Programs on lynchyperv.lab.com, and then try the operation again.

First uninstall any agent on the HyperV host machine.

Then on the SCVMM Server, navigate to the following path

Copy the folder 3.2.7895.0 to the Host machine that you want to add it to the VMM server and run to install the agent and try again to add the agent.

As in the below snapshot .. this will work for you